He is regarded as the fastest Indian bowler on the international scene and young Umesh Yadav reckons that he has been selected in the team for "sheer pace" and will never ever compromise on speed for anything else. 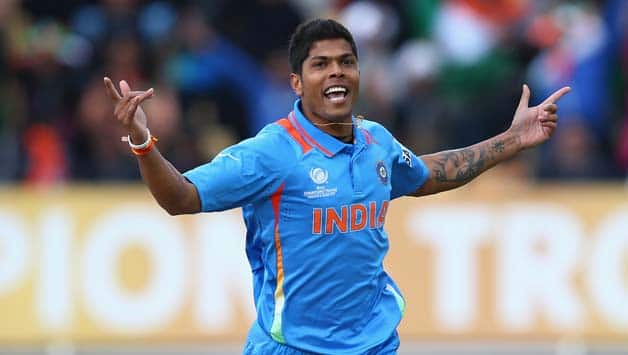 He is regarded as the fastest Indian bowler on the international scene and young Umesh Yadav reckons that he has been selected in the team for “sheer pace” and will never ever compromise on speed for anything else.

“As a fast bowler, I needed to have a clear mind about what my priorities are. My strength is to bowl consistently at a fast pace and that will always be my aim as long as I play for the national team,” Yadav told PTI during an interview.

The 25-year-old speedster said that if he ever has to cut down on his pace, it will create a “problem.”

“If I have been selected in the Indian team to play across all formats, it is because I have the sheer pace more than anything else. Even when I got injured last season [stress reaction in back], cutting down on pace never ever crossed my mind.

“Agreed, when you come back, your body asks you a few questions but you should always stick to doing what you do best,” said Yadav, who has played 9 Tests and 26 ODIs for India so far.

Whenever a new season starts, there is talk about players trying to add a weapon or two in their armoury but Yadav feels that there is not much improvisation that a speedster can bring into his bowling than what exists currently.

“Tell me what new can a bowler bring to the table apart from what we have seen so far. Whether it is back of the hand slower delivery or change in pace, there’s nothing new that the batsmen can’t counter. So it’s more important that we do any one thing consistently,” he explained.

For the Vidarbha lad, his idea of consistency is to bowl outswingers at a brisk pace.

“I have a natural outswinger and if I can bowl four to five of them at a 140 kmph plus per over, I would be satisfied with my effort,” he said.

Even the legendary Glenn McGrath‘s advice to him has been to find a “spot and hit there consistently.”

“I have met McGrath a few times in India as well as in Australia when we toured there in 2011. McGrath told me that each bowler whether he is a fast bowler or medium pacer needs to identify the area where one needs to hit. Each bowler’s length varies but if one finds his preferred length, then nothing like it.”

A lot of Indian pacers have a tendency to bowl short but Yadav prefers length deliveries which he feels can test even the best of batsmen.

“On the bouncy pitches in South Africa and Australia, it is easy to get carried away and bowl short. The moment batsmen get on the backfoot, they get that extra second. Also, Test level batsmen are adept at leaving deliveries. It’s better to bowl fuller deliveries on bouncy pitches as the batsmen would then think of driving,” he pointed out.

Talking about India’s tour of South Africa at the end of the year, Yadav is happy that he will play on pitches conducive for fast bowling.

“If you get to play at Kingsmead [Durban] where there is good carry, it easy to hit the length straightaway.”

Yadav reckoned that introduction of two new balls in ODIs have been of great help for new ball bowlers.

“It’s good that now we have two new balls in ODIs. Even in the 40th or 42nd over, the ball is effectively 20 overs old. So it’s still hard and easier to get the ball to swing.”

He is enjoying bowling in tandem with Bhuvneshwar Kumar and Ishant Sharma.

“It’s nice to bowl alongside Bhuvi and Ishant. We are different bowlers but we complement each other well. If one of us is getting wickets from one end, the other should keep it tight and pressurise the batsmen from other end. I have no problems even if I am bowling one change.”

Yadav got a well deserved break after the tri-series in West Indies but has already started his regular training at the Vidarbha Cricket Academy for the past few weeks.

“First two weeks I took a break but since then I have started training. I made a short trip to NCA to get my training chart during this phase. Since its monsoon time, I am doing a lot of indoor training as well as bowling at the indoor nets of VCA,” informed Yadav.

He will be playing in the local VCA tournament in which Rajasthan Ranji team will also be participating.

“It’s days cricket and I will get to bowl a few overs with the red ball. It will subsequently set me up for the Challenger Trophy before Australia ODI series starts,” he added.