India's young bowling sensation Umesh Yadav felt nervous bowling at the likes of Ricky Ponting in his first Test against Australia but said Sachin Tendulkar's advice hugely boosted his confidence as he scalped three crucial wickets on the opening day on Monday. India’s young bowling sensation Umesh Yadav felt nervous bowling at the likes of Ricky Ponting in his first Test against Australia but said Sachin Tendulkar’s advice hugely boosted his confidence as he scalped three crucial wickets on the opening day on Monday.

Yadav was seen to get a lot of encouragement from Tendulkar at mid-off or mid-on and the young fast bowler said the Indian legend told him to bowl fuller length deliveries to get wickets.

“Even against West Indies, at mid off or mid-on, he just boosts my confidence. He does not tell me anything particular, just asks me to bowl in my areas. He told me that in India you could get away by bowling back of length stuff. Here in Australia, it’s important to bowl a fuller length,” Yadav told reporters at the press conference after first day’s play.

Yadav said he was happy to have taken the most wickets for the visitors but was disappointed that he gave away far too many runs.

“I took wickets but also gave away far too many runs.

So I’m happy and I’m not happy as well,” said Yadav who took three wickets for 96 runs for his day’s effort.

Yadav was pulled often by Australian batsmen, especially in the post lunch session when both Ponting and opener Ed Cowan had a go at him, and he said he bowled short balls to contain the batsmen.

“It’s not that I wanted to bowl short or the team has planned so. The two fielders in the deep, at fine leg and square leg, were intended to keep the scoring down more than to catch the batsmen off a pull shot,” he said.

One of Yadav’s victims was Ponting whom he claimed caught in the slips off an outswinger and he admitted he was a bit nervous initially bowling at the Australian legend.

“I would not say any one wicket in particular was special. All wickets were special. I am touring Australia for the first time so whatever success comes my way would make me happy. In whatever way I could contribute for the team, I am happy I could do it,” Yadav said.

“It was exciting to bowl to Ponting. He has been such a big player. I wouldn’t say I was very nervous but yes there was a little bit of nervousness,” he said.

Yadav said that overall India had a good day in office though Australia put together important 63-runs for the seventh wicket at the fag end of play today.

“Partnerships happen. We did try to break it but they kept going. Yes, we have conceded a few runs but otherwise the day was good for us,” said Yadav. (PTI) 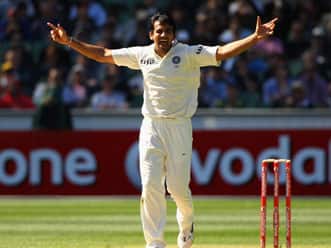