The channel India TV showed video clips purportedly taken by their undercover reporters in which the umpires were shown to be allegedly willing to give certain decisions in exchange for money.

The six umpires, who are purportedly shown in the TV sting willing to fix matches, are Nadeem Ghauri and Anees Siddiqui of Pakistan, Nadir Shah of Bangladesh, and Gamini Dissanayake, Maurice Winston and Sagara Gallage of Sri Lanka.

Ghauri and Shah have rubbished the allegations while Bangladesh Cricket Board President Mustafa Kamal said it will investigate the matter after getting the details.

The International Cricket Council (ICC) said the Council and its relevant members have been made aware of the allegations made by India TV and asked the Channel to turn over any information which can assist the ICC’s urgent investigations into this matter.

In a statement, the ICC reiterated its zero-tolerance towards corruption whether alleged against players or officials.

The ICC also said that none of the umpires named were involved in any of the official games of the ICC World Twenty20 which ended on Sunday.

Rajat Sharma, Chairman and Editor-in Chief of India TV, stood by the channel’s expose and said it was open to any inquiry or public scrutiny of their journalistic work if the authenticity of the tapes is in question.

The fact that the umpires were willing to do a “criminal” thing is unfair to cricket, he said.

Ghauri, who is an ICC International Panel umpire, has rubbished the allegations against him and claimed he has never officiated outside Pakistan.

Bangladesh umpire Nadir Shah has also strongly refuted the allegations against him.

Bangladesh Cricket Board President Mustafa Kamal said it will investigate the matter after getting the details.

“I also came to know about it from the media. So, I am not in a position to make any comment. But if it (the allegations) are true. we will definitely investigate into it.  But we have to wait until and unless we have the full details,” Kamal said.

Shah on his part said “I never fixed any match.”

“Absolutely rubbish. If I am going to fix match, I will be caught some day by the ICC. They had posed as sponsors and had approached me. But I did not agree to them. No umpire fixes matches,” he said.

The Channel showed visuals of its undercover reporters with the umpires, some of whom are purportedly making promises to give favourable decisions in lieu of financial benfits.

According to the channel, Shah offered to give decisions like “out”, “not out” in any format of the game. He has officiated in 40-plus ODIs, six Test matches as TV umpire and three Tests as reserve umpire.

Ghauri, according to the Channel, agreed to help Team India in all ways. As a quid pro quo, he agreed to take all amounts underhand in “black”. He has stood in 43 ODIs, 14 Test matches and four T20 matches.

Gallage, a Sri Lankan premier panel umpire who was the fourth umpire at India-Pakistan T20 World Cup warm-up match on September 17, agreed to give information on the match pitch report, weather and even the playing elevens of both teams for a payment of Rs 50,000, according to the channel. (PTI) 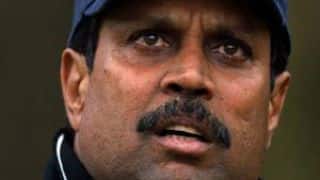