The 30-year-old Patel represents Central Stage in New Zealand’s domestic cricket circuit and is a left-arm spinner. He was included into the 15-man squad on Monay after laying his claim with an impressive performance for New Zealand A in a 2-1 T20I series win over Pakistan A in the UAE.

Across the three matches, Patel averaged 14.25 and had an economy rate of 6.45 as he took took four wickets in eight overs.

It s no secret that spin is crucial in this part of the world and with the wickets on the slower side, we ve taken the option of a second spinner to bring our squad up to 14-players, New Zealand Head Coach Gary Stead said. We re fortunate that Ajaz has been playing over here for the past month and playing well. He ll be ready to go should he get his chance in the series.

The T20I call-up comes after Patel was also named in New Zealand’s Test squad for the Pakistan Test series that starts from November 16.

Patel’s rise has come after a memorable season last year where he took 48 wickets at an average of 21.52 to be named as the domestic Player of the Year. His contribution was vital as Central Stags went on the claim the Plunket Shield for the first time in five years.

Patel joins Ish Sodhi as one of the two frontline spinners in the squad for the three-T20I series. 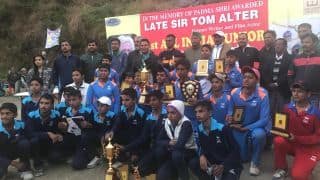