Former Australian captains Ricky Ponting, Steve Waugh and Allan Border have all backed under-fire skipper Michael Clarke in the wake of the team’s dismal Test performance against Pakistan and loss to South Africa in a T20 international, after questions were raised about the latter’s leadership.

The Express Tribune quoted Ponting, as saying that Clarke, despite battling a form slump, remained his pick as captain. Clarke’s form with the bat has been worrying, as he has averaged just 27.46 in his last 16 innings, while he failed to reach double figures in three of the four innings against Pakistan; making 2, 3, 47 and 5.

Former captain Steve Waugh said every player goes through a bad patch, and added that there was a need to place issues in context, and suggested that a decision could be takenon the way forward for Australian cricket in six months or a year’s time. A surprised Border said critics more often than not have short memories, and added that he felt Clarke was definitely the right bloke for the top job. 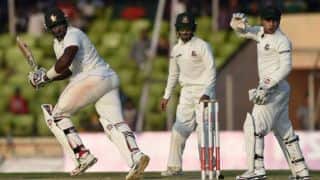 Fawad Ahmed unfortunate to be left out in the cold, says Stuart MacGill