Uniform neutral pitches not always been the case in World Cup 2019: Kumar Sangakkara

Uniform neutral pitches not always been the case in World Cup 2019: Kumar Sangakkara

Former Sri Lanka skipper Kumar Sangakkara is disappointed with the variations in wickets at different venues in England.

Former Sri Lanka skipper Kumar Sangakkara is disappointed with the variations in wickets at different venues in England, where the 2019 edition of the ICC World Cup is underway and matches are also being affected due to rain.

A number of games have been hit by rains so far in the showpiece event, which might also be a factor behind the different wickets across venues.

Expressing his disappointment, Sangakara wrote in his column for The Times of India: “Uniform neutral pitches are a key requirement for a global tournament like this and that has unfortunately not always been the case. Sides have to adjust, but the disgruntled murmurs emanating from some team camps can be understood.”

“It’s a shame that its not practical to cover the entire playing area like is the norm in Sri Lanka. That effort requires huge manpower but it has become something of an artform for us and helps protect cricket from some of the monsoonal downpours we have to contend with,” he added.

The 41-year-old also seemed upset with the drainage system and said that it too varied from venue to venue. “It’s obvious that drainage efficiency in the different venues varies greatly. In Bristol, we saw the game between Pakistan and Sri Lanka being called off in sunshine due to wet patches on the outfield while the match between England and West Indies in Southampton was played despite heavy rain throughout the week,” he observed.

Sangakkara also spoke on India opener Shikhar Dhawan and felt the injury is a big jolt in the Men in Blue’s campaign at the showpiece event. Dhawan had injured his left thumb during India’s contest against Australia but went on to play through pain and smashed a century.

“For India, the injury to Shikhar Dhawan is a big blow. His record in big tournaments is phenomenal. He has had a great start to this World Cup and his partnership with Rohit Sharma has been the foundation upon which India build their imposing totals,” he concluded. 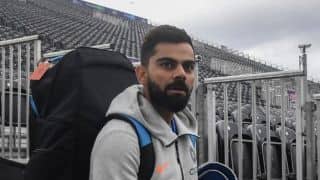 India favourites if it's a proper game vs Pakistan but if truncated, anything can happen: Sunil Gavaskar 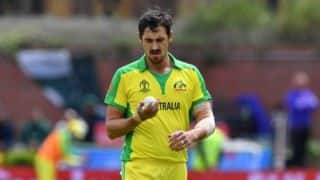 My economy rate might be higher but I'm there to make breakthroughs: Mitchell Starc