Unlike India, South Africa have no problems with presence of cricketers' families

Unlike India, South Africa have no problems with presence of cricketers' families

The Board of Control for Cricket in India (BCCI) have not allowed the wives and girlfriends to be around.

Melbourne: South Africa and India are preparing for their big clash at the ICC Cricket World Cup 2015. Both teams are scheduled to take on each other on Sunday at the iconic Melbourne Cricket Ground (MCG). While India took a break on Thursday, South Africa trained under the unforgiving sun at Melbourne. The other difference between the two camps is that, South Africa have permitted the families of players to be around during the campaign, with India asking the wives and girlfriends to stay away. READ: Russell Domingo plays down South Africa’s unbeaten history against India

When asked about the impact of the presence of the families, coach Russell Domingo told the media, “I don’t know, my family isn’t here yet! Look, the amount of time you spend away from home, it can only benefit the players — they are all professional. They all know that when it is training time, it’s training time, but instead of them just going back to their room and thinking about training, thinking about the game, they have got to look after their kids now, and they have got to take their wife out to dinner.” South Africa go cautious on Vernon Philander’s fitness ahead of India clash

Domingo went on to call it a ‘good distraction’ and said that it will only help the players switch off and come back onto the field next day. He said, “So I think it is a good distraction to have if you call it a distraction because it takes your mind off the game. Watching a lot of cricket, thinking a lot about cricket can mentally drain you, so having the family around definitely serves as a way to keep your mind fresh and to not let what’s happened or what’s going to happen drain you too much. So it is a big positive for us to have them around, no doubt about that.”  South Africa continue to train while India take rest ahead World Cup match

In contrast, the Board of Control for Cricket in India (BCCI) have not allowed the wives and girlfriends to be around. Two players have them around, more by coincidence. Shikhar Dhawan’s wife is Melbourne-based and Stuart Binny’s wife is a part of the broadcast team. They however are not staying with them at the team hotel. READ: Virat Kohli, Anushka Sharma can’t stay together during ICC Cricket World Cup 2015; BCCI set to annouce rule

The talk about banning the wives and girlfriends only came around last year when Anushka Sharma was with Virat Kohli in England, a time when he went through a rough patch. She was in Australia during the Test series as well, but Kohli was amongst the runs then. That should have put an end to the controversy. 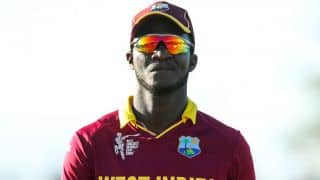