Gurkeetat Singh scored 87 not out to help India A chase down Australia A's total.

Chennai: Lavishing praise on Gurkeerat Singh for his match-winning heroics against Australia A in the tri-series final, India A captain Unmukt Chand today said that the middle-order batsman batted well at a crucial time to bail the hosts out of trouble. Chasing 227 for a win at the MA Chidambaram Stadium, India A were in trouble at 142 for six before Gurkeerat (87 not out) and Sanju Samson (24 not out) stitched an unbeaten 87-run stand to pull off a four-wicket win. Unmukt admitted the teams follies but praised the batting duo. “Of course we did not bat well really in the middle overs of the ten overs. Mayank got run out, it was unfortunate. Then we kept losing wickets and the dressing room atmosphere was tense. We needed one partnership and we were not chasing a big total. READ: Gurkeerat Singh, spinners steer India A to series-clinching win in Chennai

“We knew that it is important to have a good partnership. That is what we emphasised on and Gurkeerat did a great job. He along with Sanju did well and the way they kept on playing was important for us. It was important not to lose wicket during that phase. The wicket was not offering much. We knew if we stay over there for 40 overs or so, we will win the match. Hats off to Gurkeerat for the way he batted,” Unmukt said in the post-match presser.

Unmukt did manage a couple of fifties in the tournament also involving South Africa A, but the Delhi youngster was happy to have contributed in the team’s win. “I have been batting really well. I and Mayank had great starts and batted well in this tournament. One need to convert those 50s to hundreds is very important. For me, it is more important that my knocks contribute to the team. I have stopped thinking about scoring hundreds in particular. It is about winning matches and that is my major focus at the moment. I am not thinking about those milestones. READ: BCCI congratulates India A team members and coach Rahul Dravid on Tri-series win

Samson was dropped down the order as he came in at number eight, after Axar Patel, but the move paid off and Unmukt explained the strategy behind it. “Ashton Agar and Adam Zampa were bowling well. We wanted to change their lines a bit. They were bowling to right handed batsmen. We thought that maybe a left-right combination can work during that phase. It did work for sometime but Axar got out,” he said.

Man of the Match Gurkeerat was happy to have seized the opportunity at the right moment in making his presence felt. “You take every game as a new opportunity. I just took it as an opportunity and I am thankful that I played well today and helped India win the title. We just decided not to look on the scoreboard and play on the merit of the ball. We did not do anything extra. We just wanted to rotate the strike, may be three or four runs an over. READ: VVS Laxman congratulates India A for their win against Australia A in tri-series final 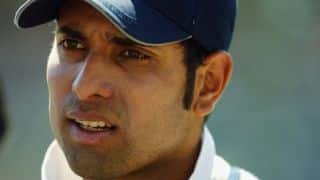