His confident strides, the swagger at the crease bear striking similarities with another former India U-19 captain and Unmukt Chand readily agrees that Virat Kohli has been an inspiration for him. 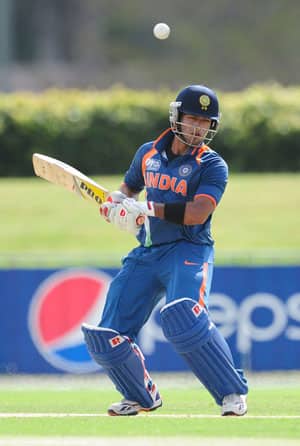 His confident strides, the swagger at the crease bear striking similarities with another former India U-19 captain and Unmukt Chand readily agrees that Virat Kohli has been an inspiration for him.

“I look upto Virat for inspiration. He is a role model for all U-19 cricketers. He has shown us and given us confidence that we all can work hard and move up the grade. From being an U-19 World Cup captain to being India vice-captain, he has been phenomenal,” Unmukt told PTI during an interaction today.

“Just after Virat scored that brilliant hundred at Hobart against Sri Lanka, I called him up in Australia to know about certain aspects of my batting. I was getting out for 30’s and 40’s and was really worried. So I called up Virat, asked him what exactly should I do? Is it mental thing that I need to sort out? Virat told me that I should plan for the next ball rather than looking too far ahead,” Unmukt stated.

Some of the well-known names of U-19 circuit like Siddharth Kaul, Ajitesh Argal have lost their way in these four years but the 19-year-old doesn’t want to think on those lines.

“I can’t comment about any other player and only talk about myself. I would always like to look at the positives and that’s why I would rather look at Virat’s example. I want to do well in all formats and not give precedence to any one particular format.”

Recently, his coach Sanjay Bhardwaj has called him “more talented at 18 years” than Gautam Gambhir and he termed it as a huge compliment.

“Any comparison with someone like Gautam bhaiya is a huge compliment. These are words which inspire you to do better as it’s not easy to achieve what he has achieved for India.”

Sachin Tendulkar’s praise that he has a “bright future” is something that he will cherish for a lifetime.

Call from Yuvraj Singh after the final was a special one for Unmukt.

“I have spoken to Yuvraj Singh earlier also and after the final, he had called to inform that he had watched the whole match. The other day, I got a call from Suresh Raina which was unexpected. I didn’t know him personally but he congratulated me and said that he would like to see me soon in the Indian dressing room.”

Unmukt will be leaving for Bangalore on September 3 as their will be a short camp at the National Cricket Academy (NCA) before the India ‘A’ team leaves for New Zealand.

“I never set any specific targets and also for this New Zealand trip, I don’t have any specific goals. But yes, I need to do my homework before I embark on this tour, which I will start once I am back in NCA.”

He may be just 19, but Unmukt’s feet are firmly rooted to the ground.

“Only after coming back to India, did I realise that it’s been a big achievement. We are getting a lot of attention but one needs to perform in order to match the adulation and praise. I believe youngsters should try and have strong foundation which should be based on academics. Be patient for success as it may not come too early.”

His father Bharat Chand Thakur said that Unmukt has never been swayed by fame and adulation and hopefully, he will remain like that.

“He is very practical and matured. Not because he is my son but he values education. Fame and money is fine but for him it is the game that is priority.”

Chand senior fondly recollected how he would listen to news bulletin on FM channels in morning and jot it down for his son, who would be reading the news at the morning assembly of his school.

“If he is articulate, it’s because he would regularly read news bulletins at the morning assembly of his school.” (PTI)