Unmukt Chand will play for the Rajasthan Royals in IPL 7.

Talented Delhi opener Unmukt Chand will be donning the Rajasthan Royals (RR) jersey in Indian Premier League 2014  but he has a bigger reason to celebrate as he will be getting former India skipper Rahul Dravid as a “mentor”.

“Interacting with Rahul bhai is always a privilege as you become a better student of the game by simply picking his brains. It will be honour that he will be constantly present in the dressing room to guide youngsters like us,” Unmukt, who was bought for Rs 65 lakh by Rajasthan, told PTI on Wednesday.

Unmukt was overjoyed when Dravid texted him after Rajasthan successfully bid for him.

“Rahul bhai sent an sms after Royals picked me up. The message read, ‘Welcome to the Royals family’. Actually, he has known me for some time now. During my India U-19 days, we used to have our camps in Bangalore and he would drop in for training sessions.

“There would be times when he would interact with us.

“Look at Sanju [Samson], how he blossomed under Rahul bhai’s leadership. It’s an essentially young team where I believe one can express themselves freely. It’s a young set-up which is not top heavy. Normally as youngsters, it’s difficult to express oneself freely if there are too many heavyweights.

The last First-class season didn’t go well for Unmukt and he is the first one to admit it upfront.

“Obviously, one century in Ranji Trophy [second innings 100 vs Mumbai] is disappointing. I got a few starts but couldn’t convert. Also we were playing on a slightly difficult track [Roshnara]. During the break, I played a T20 tournament in Mumbai and got two centuries. Hopefully, I will convert my starts over here,” Unmukt said.

A lot of former players have questioned his decision to write a book, ‘Sky is the Limit’ as they thought that it’s time to focus on cricket only.

“I wrote the book for myself, for my own happiness. Even I started writing, my move was questioned. Now I never realised it would be a well accepted book. Good for me,” he signed off. 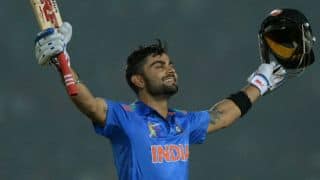