A fine century by Unmukt Chand (119) helped Delhi posts a daunting total of 342 for six in the third match of the NKP Salve Challenger Trophy against India Red on Saturday. 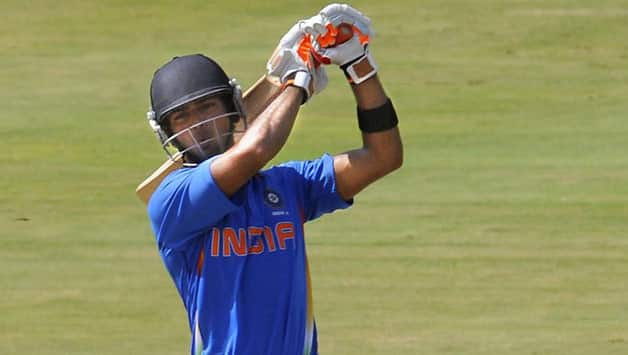 A fine century by Unmukt Chand (119) helped Delhi posts a daunting total of 342 for six in the third match of the NKP Salve Challenger Trophy against India Red on Saturday.

In a side that featured three senior players — Virender Sehwag, Gautam Gambhir and Virat Kohli — only Kohli managed to make a mark. Put into bat by Yusuf Pathan, Delhi lost the wicket of Gautam Gambhir, who started impressively but miscued a pull off Abhimanyu Mithun and was caught by the bowler for 20.  Chand, with a fair experience playing in the recent India A matches paced his innings beautifully along with Virat Kohli.

The duo added 93 for the second wicket. Kohli (63) scored at a brisk rate not before Shahbaz Nadeem foxed the batsman. Seeing Kohli coming doewn the track, Nadeem pitched it short as the ball went between the bat and pad as Smit Patel behind the stumps whipped off the bails.

Kohli’s dismissal brought Virender Sehwag. With a half-century in the previous inning much was expected of him but early in his innings the Delhi batsman misread the turn off Nadeem and was bowled for just eight runs.

From thereon, a relatively inexperienced 22-year-old Milind Kumar stitched a fine partnership with Chand to boost the total. The Delhi innings flowed at a brisk rate as Kumar and Chand further capitalised in the middle overs. Their 120-run fourth wicket partnership brought them to the brink of 300 by the 45th over before Kumar (57) and Chand were dismissed inconsecutive overs by Umesh Yadav and Mithun respectively.

However, a late surge by Rajat Bhatia powered them to 342. Bhatia in his 19-ball innings hit three sixes and fours each scoring 40.  It’s a must-win match for both sides. Robin Uthappa and Yusuf Pathan will be among the batsmen to take note of in the India Red innings.