Howard, Australia s Executive General Manager of High Performance had made it clear that the team will be picked based upon players past record in similar playing conditions.

In his last five List A matches, Usman Khawaja has scored two half-centuries and a century. However, the Queensland captain is still far from being picked for any series in the sub-continent, as that has been the case. Being dropped for overseas series repeatedly despite being in good form at home, Khawaja now is not happy with the Australian selection procedure. Though Pat Howard, Australia s Executive General Manager of High Performance had made it clear that the team will be picked based upon players past record in similar playing conditions, Khawaja finds it hard to maintain consistency after being treated the same way time and again. READ: Usman Khawaja reveals how racism existed in Australian cricket

“[It is] very hard to develop your game and play some consist cricket if you’re not getting consistent opportunities overseas, which I haven’t been getting. It’s frustrating but I’ve just got to focus on what’s in front of me. I’d love to win an Ashes series I haven’t done that yet.” ABC Grandstand mentioned Khawaja as saying. “[The selectors] never used to [change the team based on the country they were playing in] before, I’m not really sure why they do it now. It creates a lot of instability in the team I reckon, going in and out for everyone,” he said.

“You hear things like ‘the players are playing afraid’ or whatnot, but that’s what happens when you drop players all the time. We’ve been doing that a fair bit lately. I know as captain of Queensland I try and avoid that as much as possible; players I pick in the first game, I try to stick with them as long as possible, because they’ll always be the best players on the park. For some reason it seems like lately in Australia that the best players always seem to be the next guy in, which I don’t totally agree with,” he added.

Michael Hussey echoed Khawaja s sentiments, “You shouldn’t be judging someone on a couple of innings, and in one of those innings he was run-out,” Hussey told cricket.com.au’s The Unplayable Podcast.

“He hasn’t played any cricket for so long, so it’s going to take time for him to get back in and get up to speed with that match hardness. Even in the IPL he just sat on the bench the whole time, so it’s difficult and it’s going to take a little bit of time.

The former Australian further added,”I know there’s going to be the doubters out there but (Khawaja is) a quality player. He’s class, and if you show the faith, show that you believe in him, you’ll get the best out of him. If you start chopping and changing, and sending those messages that you’re not backing him, then you’re going to get these inconsistent performances.”

Khawaja is among the prospect openers for first Ashes Test and believes the Australian side looks good.

“I think the Australian team is pretty stable. I’m confident the selectors already know what their make-up of the team is going to be for the first Test. There might be a few positions up for grabs depending on what happens in the Shield games but I’m pretty confident they know what they’re expecting,” Khawaja concluded. 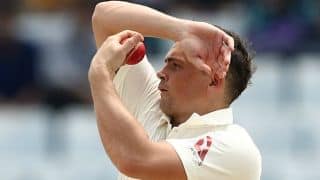