Usman Khawaja fell two runs short of a maiden One-Day International century as Australia posted a competitive 265 for seven batting first against the West Indies in the fifth match of the Tri-Nation series at Warner Park in St Kitts on Monday. Opening the batting in the absence of the injured David Warner, Khawaja got to 98 before being run out at the striker’s end pushing for a third run in partnership with George Bailey. He featured in a 170-run second-wicket partnership with Steve Smith, the Australian captain contributing 74 despite being hampered by a right leg injury. FULL CRICKET SCORECARD: West Indies vs Australia, Tri-Nation Series, 5th ODI at St.Kitts

Bailey’s pugnacious 55 prevented the innings from losing momentum completely over the final ten overs when Australia’s middle-order struggled to dominate. West Indies captain Jason Holder chose to field first on winning the toss, a decision that was greeted with some surprise given the excellent batting conditions.

However, Holder appeared to have justified his action when he removed Aaron Finch in the first over of the match, the right-hander edging a lifting delivery to Sulieman Benn at slip before he had scored. But there was to be no more success for the home side until the 35th over with Khawaja and Smith first coming to terms with the occasionally awkward bounce before dominating a bowling attack that lacked any real venom.

While boundaries were few and far between, the pair kept the West Indies on their toes with purposeful running, Smith being the more urgent of the two despite the increasing discomfort of what was later diagnosed as a twinge of the right quadriceps muscle.

Clearly intent on increasing the pace of scoring, Australia’s skipper fell to a slower delivery from Carlos Brathwaite, the all-rounder following through to take the steepling catch off his own bowling.

Khawaja became becalmed in the nineties and the desire to keep the scoreboard ticking over contributed to his demise as Jerome Taylor’s throw from the third-man boundary to substitute wicketkeeper Andre Fletcher found him just short of his ground. His innings occupied 123 deliveries and was embellished by three sixes and four fours.

Fletcher’s position behind the stumps was the result of an injury to regular gloveman Denesh Ramdin, who fell heavily on his right shoulder when attempting to affect a run out a few overs earlier.

He recovered sufficiently though to return to duty for the final overs of the innings, taking two catches to dismiss debutant Travis Head and Bailey off Kieron Pollard. Head earned his selection after David Warner was ruled out of the rest of the tournament having sustained a fractured finger in the field against South Africa on Saturday. 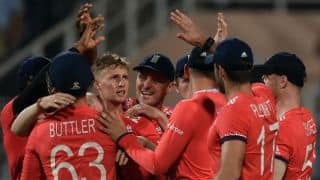