Khawaja and Smith were cruising on second day having added 137 for the third wicket before the ugly dismissal of Smith took place.

Melbourne: Despite scoring his career-best knock in the ongoing Adelaide Test against South Africa, Australian batter Usman Khawaja had a moment in the game which gave him his one of the worst feelings in cricket . Khawaja, who scored a brilliant century on Day Two of the ongoing day-night Test, was involved in a terrible mix-up with captain Steve Smith which ultimately resulted in the latter s dismissal. Khawaja and Smith were cruising on second day having added 137 for the third wicket before the ugly dismissal of Smith took place. On the last ball of the 61st over, the pair was involved in a terrible mix-up that left the Australia skipper stranded mid-pitch and run-out as he desperately retreated back to his crease. LIVE CRICKET SCORECARD: Australia vs South Africa, 3rd Test at Adelaide

It was one of those ones where he looked at me and first said ‘no’, so I stopped and pulled back and then he said ‘yes’ and by that time I d already committed to no It s one of the worst feelings in cricket I reckon. Especially, when you do it to the captain, Khawaja was quoted as saying by cricket.com.au. Khawaja (145) scored his fifth century which included 12 boundaries. An Australia dominated day saw South Africa ending the third day at 194 for 6 with lead of 70 runs on Day Three of the final Test.

It was Nathan Lyon s lucky day as he ended with a three-wicket haul in final few minutes of the day. Mitchell Starc, Josh Hazlewood shared three wickets, keeping South Africa on toes. However, South African opener Stephen Cook s second fifty came handy to save his side from the trouble. Cook and Quinton de Kock were not out at 81 and 0 at stumps. Post Kyle Abbott s wicket, it will be a fresh start for the Proteas. South Africa have clinched the series by 2-0 and Australia are trying all their best to avoid sixth consecutive Test defeat and first-ever whitewash at home. 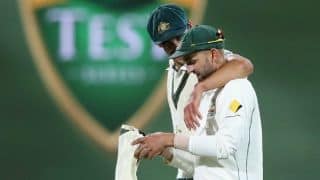