Uttar Pradesh sealed their berth in the Ranji Trophy quarter-finals after their final match.

Uttar Pradesh sealed their berth in the Ranji Trophy quarter-finals after their final Group B league match against Railways ended in a draw on the fifth and final day.

Uttar Pradesh ended at second spot in Group B, ahead of Bengal — who also qualified for the quarterfinals — on a better quotient, while Railways are on top of the group with 28 points.

Uttar Pradesh opener Tanmay Srivastava scored 103 with 11 fours and a six, and combined with Umang Sharma for a third-wicket association that yielded 78 runs.

Srivastava was dismissed in the 71st over, but Umang remained unbeaten on 51 as the hosts ended at 231 for 3 from 77 overs.

Railways had begun the day at 460 for 4 with their overnight centurions Arindam Ghosh (181) and Mahesh Rawat (188) still at the crease, but left-arm spinner Ali Murtaza picked up four quick wickets before the visitors eventually declared at 518 for 9.

Uttar Pradesh will now go to Bangalore to face Karnataka in the quarterfinals while Railways face Bengal in Kolkata. 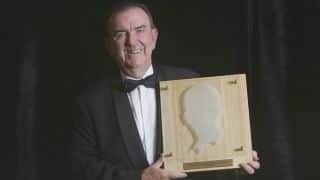