Sri Lanka were sweating over the World Cup final fitness of Muttiah Muralitharan and Angelo Mathews on Thursday as 37-year-old seamer Chaminda Vaas and Suraj Randiv were called-up as cover. 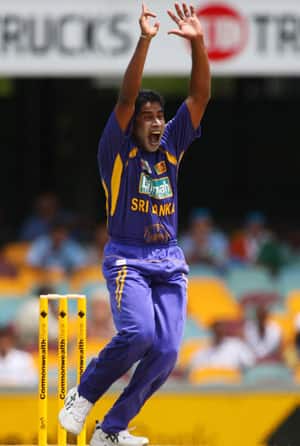 Chaminda Vaas has been recalled in the Sri Lanka squad

Sri Lanka were sweating over the World Cup final fitness of Muttiah Muralitharan and Angelo Mathews on Thursday as 37-year-old seamer Chaminda Vaas and Suraj Randiv were called-up as cover.

“Chaminda Vaas and Suraj Randiv will be included in the Sri Lankan squad for the World Cup final as cover for the injured (Muttiah) Muralitharan and (Angelo) Mathews,” Sri Lanka Cricket said in a statement. Vaas, 37 and Randiv, 26, were due to fly out to Mumbai later Thursday ahead of Saturday’s title match against India.

Muralitharan, who turns 39 next month, has played through the six-week tournament despite suffering hamstring and groin injuries, a side strain and a troublesome knee. But coach Trevor Bayliss insisted on Thursday that Muralitharan, who will retire after Saturday’s final, will play against India. “Chances are good that Murali will play,” said Bayliss. “He completed 10 overs in the semi-final, and such is the character of the man that he will play even with discomfort,” he said.

All-rounder Mathews, 23, picked up a right-side strain while fielding during Tuesday’s semi-final win against New Zealand. Sri Lanka, 1996 winners and 2007 finalists, want to win the cup for legendary spinner Muralitharan who will retire after a world record haul of 800 Test and 534 one-day wickets.

Vaas, who was part of the 1996 winning team, retired from Tests in July with 322 Test and 400 one-day wickets. He last played an international when India toured Sri Lanka in August 2008, taking the wicket of Yuvraj Singh for a duck. Randiv, who made his one-day debut against India in 2009, has taken 22 ODI wickets. He last played when Sri Lanka toured Australia for a one-day series last year.