Yuvraj Singh has been dismissed in the Indian Premier League (IPL) 2015 encounter between Royal Challengers Bangalore (RCB) and the Delhi Daredevils (DD) at the Feroz Shah Kotla. Off the next ball, Angelo Mathews was out as a ball lobbed off his bat and was taken at mid-wicket. Varun Aaron was the bowler who got RCB those two big wickets. Live Updates: Delhi Daredevils vs Royal Challengers Bangalore, IPL 2015

RCB picked up their form earlier in the week when they beat Rajasthan Royals (RR). In this game, they got the early wicket of Shreyas Iyer and then after a few overs, they had skipper JP Duminy. Aaron came in to bowl the seventh over and he got one to move away from Yuvraj, who tickled it to the wicketkeeper. And then, he surprised Mathews with one that climbed and the ball leapt up. Kedar Jadhav played the hat-trick ball and left it. Live Scorecard: Delhi Daredevils vs Royal Challengers Bangalore, IPL 2015

Earlier, RCB had won the toss and had chosen to bowl first. DD have been struggling in the first few overs and they need some good knock to put up a good score. They are an unchanged side from the previous game and do not have Manoj Tiwary and only have the extra bowler. On the other hand, RCB brought back Aaron for Yuzvendra Chahal, who is injured. 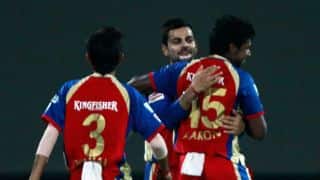