Veda Krishnamurthy might be enduring a lean run with the bat but she isn't losing sleep over it.

Veda Krishnamurthy might be enduring a lean run with the bat but she isn’t losing sleep over it and is determined to give her best when she next takes the field for the India women cricket team.

In her last two series, Veda recorded 51 runs in three innings at the Women’s T20 Asia Cup in Kuala Lumpur and then 40 runs across three innings in a T20I series against Sri Lanka.

The 25-year-old, who has been named in the India squad for the 2018 ICC Women’s World T20, is keen to overcome the slump in form while maintaining a positive mindset.

“The last good series I had was the one against South Africa (in February),” Veda was quoted as saying by The Times of India on Wednesday. “After that, I hit a lean patch. But I’m not losing sleep over it because I can’t afford to get weighed down by the situation. I can’t let myself down. If I do, then it is going to destroy all that I have worked for through my career. So, it is important for me to put my head down, work on my game and get the flow back. I’ve been working hard in that direction.”

Veda signed up with Hobart Hurricanes for the Women’s Big Bash League last season and played in nine matches, hitting 144 runs at a strike-rate of 101.41. The experience, she says, has helped her become more mature and rethink her game.

“In Australia, I had to get out of my comfort zone because the Indian team is like a family, The experience of a new team, culture and players made me more matured and responsible. Also, I had a lot of time to think about myself and my game,” she said.

At the WT20, that starts from November 9 in the West Indies, India have been placed in Group B that also includes Australia, New Zealand, Pakistan and Ireland. It’s a tough pool to be in and the 25-year-old Karnataka admits India aren’t looking too far ahead.

“As a team, we have been preparing for the World Cup through the bilateral series and at national camps. Our immediate aim is to get past the group stages. It is a tough pool with Australia, New Zealand and Pakistan, who can be dangerous on their day,” she said.

India women made it to the final of the 2017 ICC World Cup where they lost to England in a dramatic clash. With their recent performances, expectations will be high from the Harmanpreet Kaur-led side.

Veda feels that despite the weight of expectations, the team won’t be under pressure but will aim to meet the standards they have set. “I wouldn’t say we will be under pressure. Instead, I think, we have set high standards and now it is important for us to stay close to it. We want to make sure we play quality cricket and get better day-by-day. We don’t worry about what people say, but we want to stick to what we have outlined for ourselves as a team,” she said. 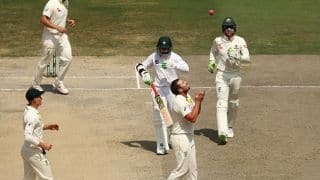