The South African team medical staff will again be keeping a close eye on opening bowler Vernon Philander in the lead-up to the second Test against New Zealand, starting in Port Elizabeth on Friday. 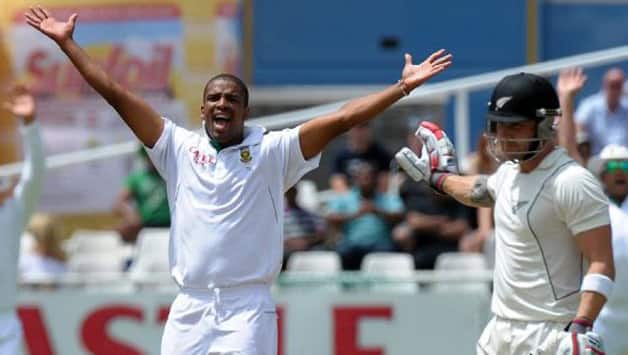 The South African team medical staff will again be keeping a close eye on opening bowler Vernon Philander in the lead-up to the second Test against New Zealand, starting in Port Elizabeth on Friday.

Philander, who collected his fifth man of the match award in only 13 matches after destroying the New Zealand batting in the first Test at Newlands, was a doubtful starter for the match after injuring his left hamstring less than two weeks earlier.

He felt stiffness in the same hamstring in the second innings and left the field before South Africa completed a win by an innings and 27 runs inside three days.

Mohamed Moosajee, the South African manager and team doctor, said Philander would be monitored closely, especially because it was a recurrence of the injury that made him doubtful in the first place.

With three Tests against Pakistan following soon after the two-match New Zealand series, Moosajee said the team management would need to be sure that Philander was fully recovered, rather than risk him aggravating the injury and then possibly having to miss most of the Pakistan series.

Philander, 27, has enjoyed phenomenal success since he made his Test debut against Australia at Newlands in the 2011/12 season.

In his first Test, he took five for 15 as Australia were bowled out for 47 in the second innings and he was again the main destroyer, taking five for seven, when New Zealand were dismissed for 45 in the first innings at the same ground last Wednesday.

He has had eight five-wicket hauls and has twice taken 10 wickets in a match. His tally of man of the match awards equals those of fast bowling partner Dale Steyn, who has played in 61 Tests, and batsman

But he has had injury concerns and has twice had to miss Tests — the second against Sri Lanka in his debut season because of a knee strain and the second in the recent away series against Australia because of a back injury.

If Philander had to miss the Port Elizabeth Test he would almost certainly be replaced by Cape Cobras teammate Rory Kleinveldt, who is part of the Test squad. But Kleinveldt could play as an extra bowler if Philander is fit.

Smith said after the Newlands Test that a four-man bowling attack, with the addition of Kallis, had been good enough to take 20 wickets. But he added that having AB de Villiers as a specialist batsman who also kept wicket meant there was room for an extra batsman or bowler.

“It gives us options,” said Smith. “We will look at the situation again in Port Elizabeth.”

Dean Elgar played as an extra batsman in the first Test but a scratchy innings of 21 and a dropped catch, which followed a “pair” in his first Test against Australia last month, did not advance his cause.