Ben Stokes is desperate to get England's World Cup campaign under way after guiding the team to a series-clinching win over Pakistan.

Ben Stokes is desperate to get England‘s World Cup campaign under way after guiding the team to a series-clinching win over Pakistan.

Stokes held his nerve following a top-order collapse with an innings of 71 not out as England eventually chased down a target of 341 in the last over of Friday’s fourth one-day international at Trent Bridge.

Victory gave England an unassailable 3-0 series lead ahead of Sunday’s finale at Headingley.

But for multi-format players such as Stokes this may be the least of England’s achievements in a home season featuring both the World Cup and an Ashes series.

“We were talking about this, I think it might have been last night, how lucky we are as players to be involved in a home World Cup and home Ashes in the same summer, it’s very exciting to think about,” said the all-rounder. “I just want it to start.

“We wanted to make sure our focus was on this series and not be thinking about the World Cup and we’ve done a great job so far. We’d love to take the (Pakistan) series 4-0 but, whatever happens, it is a clean slate after Headingley and we need to concentrate on the World Cup.”

Stokes’ innings was a timely boost for England, bidding to win the World Cup for the first time, as it showed they could get out of a tight spot when their ‘Plan A’ of blistering run-scoring by their specialist batsmen was not enough to win a game.

“It’s always nice to get some time out in the middle and it’s good to take some positives forward with the World Cup just around the corner,” said Stokes. “As everyone knows, we generally seem to have a stinker somewhere in a series,” the Durham star added.

“This could have been that game for us but the confidence we’ll take from losing four quick wickets then still finishing off the game will stand us in great stead. The most confidence I’ll take from that was being there at the end. The one thing I wanted to do and not throw it away when we got to that winning position.”

A lively pace bowler when fully fit, Stokes has sent down a mere 13 overs during the Pakistan series ahead of Sunday’s match in Leeds. Stokes saw his bowling in this year’s Indian Premier League restricted by a hamstring injury and he is currently managing an elbow problem.

Meanwhile with the likes of Jofra Archer, Mark Wood, Liam Plunkett, David Willey and Tom Curran all keen to prove their worth ahead of the World Cup, England do have plenty of other pace-bowling options.

Stokes insisted his recent elbow trouble was simply the result of an unusually busy stint in the field during the second ODI in Southampton.

“It’s nothing, just from too much throwing. I’ve had it before,” he said. “It’s a bit better, the long boundary at Southampton didn’t do me any favours. I doubled the normal throwing workload that I’d do in a game. So I’m just resting it.” 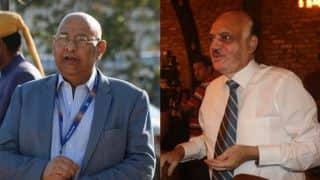