Adam Voges is unbeaten on 47.

Australia middle-order batsman Adam Voges, who is unbeaten on 47 on Day One of the fifth Ashes 2015 Test at The Oval was practicing hard at the nets with just moments to go for the play to begin. Voges is currently batting with Steven Smith, who is unbeaten on 78. Australia finished Day One at 287 for 3 and will look to consolidate on it on Day Four. Voges, who has not had a good series so far will want to make this start count and convert this into a century. Smith, who has not contributed much other than a double ton at Lord’s will also look to make amends and score another big century.

47 not out and counting #Ashes pic.twitter.com/Z1VGsH1EVz

Smith and Voges relied on a tried and tested method of waiting for the loose ball to put away. They located gaps on the field and placed the balls there, in case of deviation of lines from bowlers, to collect their runs without much drama. Smith was severe on Ali, hitting him for two fours and a six to get 19 off the off-spinner’s 15 balls, and Steven Finn, against whom four fours were struck. Voges, on the other hand, played a few clinical flicks towards deep midwicket to get his runs. He hit Finn for three fours, and Stuart Broad and Stokes for two fours each.

Michael Clarke, in his final Test, scored 15 before faintly edging Stokes behind. 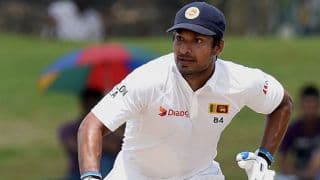