Miller can be seen trying his hand at cooking on a show named Sunfoil with the Chef J’Something.

South Africa’s maverick left-handed batsman David Miller has stunned everyone with his magnificent ability to take on any bowling attack. Miller has been one of the most important cog for South Africa in the shorter formats. He has the ability to turn the game single-handedly and has done it on quite a few occasions.

Miller is also a well-known name in Indian cricket as his contribution towards Kings XI Punjab side in the Indian Premier League (IPL) has been phenomenal. He is undoubtedly one of the biggest entertainers in the IPL and Fans love him for his hard-hitting.

In the video below, which was posted by ProteasCricket on their YouTube channel, Miller is seen trying his hand at cooking on a show named Sunfoil, where he can be seen cooking with the Chef J’Something. Sunfoil is the official sponsor of South African cricket team. Read: Kagiso Rabada tries his hand at cooking, rolls his arm in the kitchen.

Miller and J are seen cooking some appetizing boerewors with caramelized onions and the entire episode is captivating. Miller’s knack of excelling on the field has successfully transformed in the kitchen too. Eventually, the dish looks delicious and Miller admires it.

Miller had a decent run for the Dolphins in the Sunfoil series and will have a crucial role to play when South Africa take on England in the shorter formats. The two giants at present are locking horns with each other at Durban in their first Test as the match is evenly poised at stumps on Day 2. The hosts are 137 for four and are still trailing by 166 runs in the first innings. 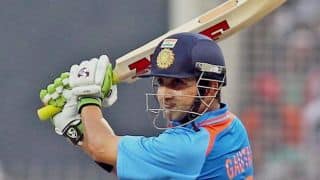