Virat Kohli missed out on a record of equalling Alastair Cook‘s record of hitting five centuries in his first five games as a Test captain. He scored three hundreds in Australia, a couple at Adelaide and one in the final Test at Sydney. He scored a brilliant ton at Galle in the first Test as well against Sri Lanka. In the second Test, his 150-run stand with KL Rahul ensured India recovered well from the early stutter to be steady now at 176 for three after the end of 44 overs. Kohli was out trying to run one down to third man of the face of the bat but Angelo Mathews at first slip dived low to his right to take a brilliant catch to get dismissed for 78. Live cricket updates: India vs Sri Lanka 2015, 2nd Test at Colombo, Day 1

India lost the wickets of Murali Vijay and Ajinkya Rahane early in the day. Vijay was trapped in front of the stumps for a duck while Rahane drove loosely at one outside off to be caught at third slip. Dhammika Prasad was the bowler on both the occasions. Sri Lanka would have had India in tatters had Jehan Mubarak accepeted a sitter when Rahul tried to cut one but hit it hard to Mubarak at gully who dropped the sitter. Angelo Mathews shared the new ball with Prasad and Dushmantha Chameera was the unlucky bowler who had the catch dropped. Live cricket score India vs Sri Lanka 2015, 2nd Test at Colombo, Day 1

Earlier, India won the toss and elected to bat first. India made three changes with Shikhar Dhawan, Harbhajan Singh and Varun Aaron going out for Vijay, Stuart Binny and Umesh Yadav. Sri Lanka had a forced change to make, they replaced Nuwan Pradeep with Dushmantha Chameera. 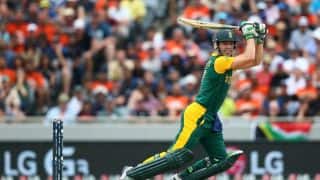