In this video, BJ Watling is seen flirting with the GoPro as he installed a camera on his forehead while practising to catch the ball with the gloves on.

The rise of technological advancement in the game of cricket has been phenomenal, from UDRS to the drone; the equipment has just risen to newer heights. GoPro is a technology which installs a camera on the helmet of a batsman or a wicket-keeper to give the viewers an actual experience of the game. Also Read: Dale Steyn hits the nets with GoPro

In the below video which was posted by Black Caps TV on YouTube, New Zealand wicket keeper BJ Watling was seen flirting with the GoPro as he installed a camera on his forehead while practising to catch the ball with the gloves on. The view was too realistic and hair-raising. Watling is seen collecting the speedy balls and diving everywhere to grab the red cherry.

Any cricket lover watching a match on the television would have thought that keeping wickets is not that tough but after watching this video they would surely alter their opinion. The ball travels like a tracer bullet and there is hardly any time to react.

After watching Watling here, one thing is for sure that wicket keeping demands incredible athleticism at the international arena. Technology has definitely taken a rise stay tuned with what comes in next, who knows one might get to feel how a bowler or a batsman feels in a tensed situation in the future.

New Zealand won the first Test at Dunedin against Sri Lanka and are now eyeing for a whitewash as the second Test commences on Fridayat Hamilton. Watling didn’t manage to make an impact with the bat in the first Test and will be anxious to make the opportunity count at Hamilton but his wicket keeping skills were up to the mark. 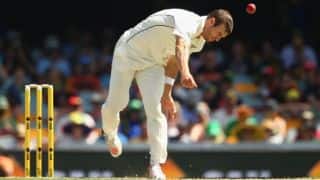