VIDEO: Chris Gayle sledges Brad Haddin, celebrates after getting him out
By CricketCountry Staff

Chris Gayle is a rare talent with the bat, and the “World Boss” is a crowd-puller in every format of the game. He and Brad Haddin exchanged a few words before Gayle dismissed him during a Big Bash League (BBL) match. Gayle celebrated in inimitable fashion, as only he could. Haddin is currently on his way out of international cricket, announcing his Test retirement ahead of The Ashes 2015. Darren Lehmann said ahead of the fifth Ashes 2015 Test between England and Australia at The Oval, “We certainly care about Brad and his family. We’re really close as a group. We’ve talked about it openly. That would be the hardest decision I’ve had to make as a coach, or even as a player. We all love Hadds. The players love Hadds. He’s a ripper bloke – one of the best blokes I’ve ever coached, brilliant person, great family.” READ: Michael Clarke confirms selectors’ decision to drop Brad Haddin for 3rd Ashes 2015 Test at Edgbaston

Peter Nevill also said, “He’s a wonderful guy; I’ve said it many times. To be able to get a lead and something to bowl at, it was great to be able to do that. I sort of felt that I’d done the work to get here and I haven’t been concerned that I’m not up to it. I had a number of moments where the crowd are very vocal and the England quicks were steaming in. I just took a little moment to think to myself ‘how much fun is this?’ I would have loved to have put on more.” (With inputs from AFP) READ: Ashes 2015, 3rd Test at Edgbaston: Ricky Ponting terms axing of Brad Haddin as ‘mistake’ 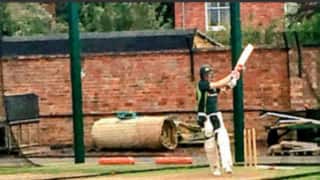