VIDEO: Glenn Maxwell does a MS Dhoni during 1st T20I against Sri Lanka, pulls off helicopter shot to perfe

Australia allrounder Glenn Maxwell was in ominous touch during the 1st T20I against Sri Lanka on Saturday as he smashed 62 off 28 balls. Maxwell’s destructive knock was laced with seven fours and three sixes. In the 18th over of the Australian innings, Maxwell went after Kasun Rajitha and smashed him for consecutive sixes. The second six hit by Maxwell in the 18th over gave fans a glimpse of the helicopter shot, which is a signature MS Dhoni hit.

Rajitha went full, looking to hit the yorker length. Maxwell, who was set, went deep in his crease to get the elevation and the swing of the bat. He hit it from the middle of the bat and it went sailing into the crowd for a maximum.

Maxwell brings out the helicopter! Consecutive sixes for the Australia’s No.3!

Chasing a target of 234, Sri Lanka were only able to score 99/9. Lankan team struggled to form big partnerships and lost wickets at regular intervals.

Sri Lanka suffered an early blow as they lost their opener Kusal Mendis in the first over during the innings. Danushka Gunathilaka (11) and Dhanuka Rajapaksa (2) failed to score big runs and were departed by Pat Cummins in the fourth over.

Kusal Perera and Oshada Fernando built a stand of 33 runs for the fourth wicket. The duo helped their side to get past the 50-run mark. 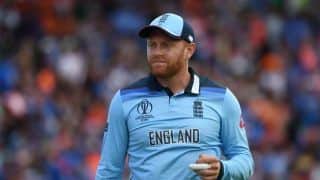