Video: Glenn Maxwell gets a dose of his own medicine

Video: Glenn Maxwell gets a dose of his own medicine

Maxwell has made a name for him with the bat and has been effective with the ball too.

Glenn Maxwell is a renowned hard hitter of the cricket ball and is well known to take world class bowlers for cleaners. Maxwell has made a name for him with the bat and has been effective with the ball too. Many a times it has been witnessed that a particular cricketer gets a taste of his own medicine either with the bat or with the ball.

During the second One-Day International (ODI) of the West Indies in Australia ODI series at Perth in February 2013, Maxwell conceded four consecutive sixes with the ball and to add to his woes, those sixes were not even hit by a batsman. Yes! It was a bowler, mystery spinner Sunil Narine.

Australia posted a modest target of 267 in their first innings for the visitors to chase. The momentum was already lost in the run chase as they lost three early wickets but some resistance from Kieran Powell and Dwayne Bravo gave some ray of hope.

Narine came out to bat after Darren Sammy’s dismissal as West Indies were 179 for eight. Narine took on the very first delivery of the 37th over from Maxwell and dispatched him for a maximum over his head. Narine was ruthless and didn’t show any mercy as he smashed the next three deliveries straight over the boundary. The most interesting part was that he was trying to hit it straight and didn’t experiment too much. His timing was the key along with brutal power.

West Indies were now hoping for a miraculous performance from Narine and victory was on the brinks as they needed more 58 runs from 80 deliveries with a ballistic left-hander at the crease. The fifth delivery of the over was a dot as Maxwell bowled a quicker one away from Narine’s reach. The next delivery too was a similar one and this time Maxwell got the better of Narine as wicketkeeper Matthew Wade did the job behind the stumps.

This was one of the memorable cameo played by any bowler and was definitely a nightmare for Maxwell. Australia won the game by 54 runs but Narine’s knock was applauded by the home crowd. That was some serious hitting! 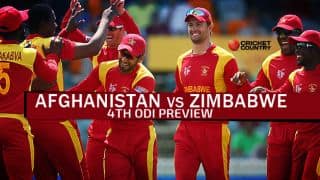