Video recap of a riveting fourth day of the third Test between India and England at Trent Bridge.

A rejuvenated India are one wicket away from an epic win at Trent Bridge, courtesy a sensational five-wicket haul from Jasprit Bumrah in his comeback game. Adil Rashid s plucky 30 has kept India waiting for victory, but they will be the team who will enjoy their sleep tonight.

It took India 57.2 overs to separate Jos Buttler and Ben Stokes, but once they did, the next three wickets fell in 19 balls to change the tone of an absorbing fourth day day that highlighted the allure of Test cricket. Dropped on 1 by the debutant wicketkeeper Rishabh Pant, Buttler produced his maiden century, and longest innings in Tests, while dominating a record partnership with Stokes who produced an innings of admirable restraint. The pair took England from 62/4 to 231/5, batting out the entire afternoon session and raising hopes of taking stumps unscathed, but a terrific three-wicket burst from Bumrah with the second new ball kicked the door down. 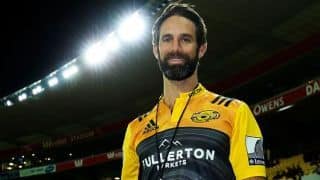