India came up with a stellar performance as they beat Australia convincingly by six wickets, against Australia in ICC World T20 2016.

Former champions India came up with a stellar performance as they beat Australia convincingly by six wickets, against Australia, in the Super 10 Group 2, Match 31 of the ongoing ICC World T20 2016 at the Punjab Cricket Association (PCA) Stadium in Mohali on Sunday, as you can catch the video highlights of the match on icc-cricket.com. Virat Kohli, played the master knock of 82, helped India steer to the semi-finals of the tournament, where they possibly play West Indies on Thursday. Kohli was overwhelmed by his innings and termed it as one of the top three innings of his entire career so far, and also said that had not MS Dhoni calmed him down, he would have got carried away and gave up his wicket. FULL CRICKET SCORECARD: India vs Australia, Super 10 Group 2, Match 31 at Mohali

India qualified for the World Twenty20 semi-finals and knocked out Australia after Virat Kohli smashed a brilliant unbeaten 82 in their do-or-die showdown in Mohali on Sunday. Kohli’s powerful 51-ball knock propelled India to a six-wicket victory, successfully chasing down Australia’s 160-6 total and keeping their World T20 title dreams alive. India now face the West Indies in a semi-final encounter in Mumbai on Thursday, despite the Caribbean side suffering their first loss at this tournament to underdogs Afghanistan earlier on Sunday. England play New Zealand in the other semi-final in New Delhi on Wednesday, before the final showdown at Kolkata’s Eden Gardens on Sunday, reports AFP. FULL CRICKET UPDATES: India vs Australia, Super 10 Group 2, Match 31 at Mohali

India, who won the inaugural tournament in 2007, are gunning to become the first nation to clinch the title twice and the first ever on home soil. Australia’s hopes of winning their first World T20 trophy are once again in tatters, with the top-ranked Test side now bowing out of the tournament, added AFP. 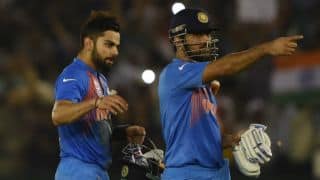 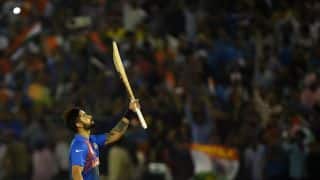