Opener Shikhar Dhawan (56) and skipper Shreyas Iyer (58*) led from the front as Delhi Capitals turned their poor home record with a convincing 5-wicket win over Kings XI Punjab at the Feroz Shah Kotla on Saturday. They reached 166/5 with two balls to spare. With the win, DC now have 12 points from 10 games and have moved one step closer to qualifying for the play-offs.

Chasing 164 for victory, Delhi Capitals didn’t start in the most auspicious fashion as they lost Prithvi Shaw for just 13 in the fourth over, run out by Mandeep Singh. But Shikhar Dhawan was in the mood for a long stay as he looked to take the attack to the KXIP bowlers in the company of skipper Shreyas Iyer.

They matched each other shot for shot and looked to punish the bad balls as they also rotated the strike well to keep the momentum in DC’s favour. But just when it looked like Delhi would run away with the game, Hardus Viljoen sent back Dhawan (56 off 41 balls) as R. Ashwin took a brilliant catch running back. 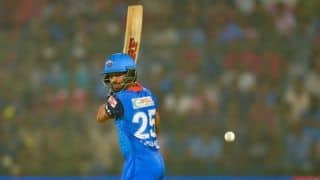