Kane Williamson, Yasir Shah and Mitchell Starc have been named in the top 10 players of 2015 by Lord’s Cricket Ground

Kane Williamson, Yasir Shah and Mitchell Starc have been named in the top 20 players of 2015 by Lord’s Cricket Ground official YouTube page. Williamson is at the sixth position, whereas Yasir and Starc are give seventh and eighth positions respectively. Williamson has been in form of his life and has been one of the most consistent batsmen for New Zealand. His unblemished technique and flawless style of play has made him of the best in contemporary cricket. Ravichandran Ashwin and Angelo Mathews included in top 20 cricketers of 2015 by Lord’s

Williamson has created many records in the year 2015; he is the highest run-scorer in One-Day Internationals (ODIs). He scripted history when he became the fastest New Zealand batsman to have reached the 3,000 runs milestone in ODI cricket. He shot to limelight when he saw his name being inscribed on the famous Lord’s honours boards after he scored a Test hundred there. Alastair Cook, Trent Boult and Younis Khan included in top 20 cricketers of 2015 by Lord’s

Yasir on the other hand is tipped to be the next bowling sensation of this era. His leg-spinning quality has been exceptional and has led the Pakistani spin attack with immense confidence. He reached the second rank in the ICC Test bowling rankings. He also recorded the best bowling figures for a visitor in Sri Lanka when he claimed seven wickets for 76 runs. Yasir is also the fastest Pakistani bowler to have picked 50 Test wickets when he achieved this feat in just nine matches. Virat Kohli, Ben Stokes and Shakib Al Hasan at 14, 15, 16 respectively in Lord’s top 20 cricketers of 2015

Australia’s Starc has stunned the world with his ability to bowl yorkers consistently. He has been equally effective with the red ball and was instrumental behind Australia’s triumph in the 2015 World Cup. He was the leading wicket taker with 22 scalps to his name in the 2015 World Cup. He is also the leading wicket taker in ODIs in 2015. He attained the first rank in the ICC ODI bowler’s rankings for his tremendous performances. Martin Guptill, David Warner and Chris Gayle included in top 20 cricketers of 2015 by Lord’s 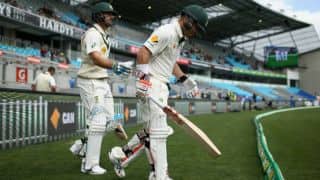