Kumar Sangakkara bid adieu to his Surrey career in style, scoring yet another century in the final match. Surrey played Somerset at The Oval where Sangakkara s 157 took the former to a first-innings total of 433 to eventually defeat their opponents by 6 wickets. Present at the ground were a handful of fans who admire Sanga s elegant batting. As the Sri Lankan legend scored a 35 in the final innings of his career, the spectators of the Peter May Stand gave him a standing ovation. READ: Kumar Sangakkara to deliver Jagmohan Dalmiya Memorial Lecture?

Sangakkara, who retired from international cricket in 2015, played for Surrey in three seasons. In the current season, he scored a record-breaking 28.99% of Surrey s total runs (excluding the extras) 1442 runs of 3538 scored by the other Surrey batsmen, to be exact. Here is the video of Sangakkara walking out of The Oval for one last time, as shared by Surrey Cricket on Facebook:

Surrey honoured Sangakkara with a lifetime membership for his contribution towards the club.

Thank you @surreycricket for the Honorary Life Membership. I am very grateful and will cherish it. Thank you also for 3 years of joy

Ahead of the season, Sanga had announced that this would be his last season as a First-Class cricketer. 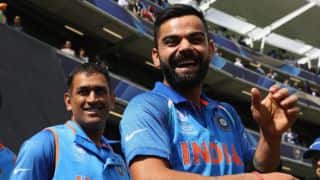