Video: Mitchell Starc stuns James Vince with the ball of The Ashes 2017-18

Video: Mitchell Starc stuns James Vince with the ball of The Ashes 2017-18

The ball deviated 3.9 degrees. It is a common sight for a spinner. Ravindra Jadeja often does that to right handers. Coming round the wicket, he darts the ball away from the batsmen, squares as well as beats him all ends up. Mitchell Starc has a similar round-arm action, but he cannot spin the ball as searingly as Jadeja does, can he? No? Yes! Here’s what he has done in the third Test of the 2017-18 Ashes.

Kevin Pietersen right away tweeted, calling it the ball of the Ashes.

A few minutes ago, the commentators had a discussion on how Vince has been unlucky in the series, that he often faces a snorter of a delivery. And then, this happened! It perhaps may have hit a crack, you may say that. But Starc deserves some credit. He placed the shiny side away from Vince to jab it away from him. More importantly, he placed the ball in the right channel.

Vince went for a well-made 56. 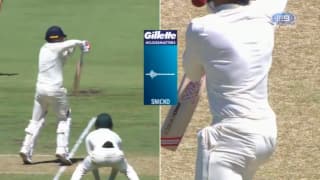