His manic approach is widely known in the cricket fraternity, and inarguably one of the biggest six-hitters in the fraternity.

How often we have seen the very next delivery getting dispatched for a boundary right after a batsman gets a reprieve. Well, one will get to see more frequently if the batsman on strike is Shahid Afridi. His manic approach is widely known in the cricket fraternity, and inarguably one of the biggest six-hitters in the fraternity. Afridi, for this quality of his is also reckoned as ‘boom boom’. He’s been the reason behind nightmares for many bowlers but consistency has taken a heavy toll of him. READ MORE: Best strike-rates, most sixes and other batting stats from IPL 2016

During the third One-Day International (ODI) between South Africa and Pakistan at Johannesburg, Ryan McLaren bore the wrath of Afridi after overstepping the line. Batting first, South Africa posted a hefty total of 343 on the board with Hashim Amla and AB de Villiers both scoring centuries. Pakistan had a task in hand and were placed in a delicate position at 227 for the loss of six wickets inside 35 overs. ALSO READ: Best economy rates, most dot balls bowled and other bowling stats from IPL 2016.

Afridi was at the crease batting on 73 from 41 and probably the last ray of hope for his side. McLaren steamed in and bowled a low full-toss which was almost a yorker and Afridi played it on to his stumps. His long walk to the pavilion was in progress when umpire Billy Bowden asked him comeback as McLaren bowled an illegitimate delivery. The crowd was pumped so as Afridi and the pressure was back on to the bowler. He bowled a wide and the free hit was still one with the crowd on their feet. READ MORE: IPL 2016: Most memorable moments, Part I

The very next ball offered was a length to which Afridi gave a full throttle and smashed it over long-on fo a massive six. The ball sailed all over the roof and was undoubtedly one of the biggest in the history of cricket. The sound which occurred when the leather kissed Afridi’s willow was every batsman’s fantasy. It was a perfect example of how dangerous or costly a no-ball could be. Afridi made the utmost use of the free hit but floundered at the score of 88. He played a determined innings but lacked enough support from the other end. READ MORE: IPL 2016: Orange Cap holders in the history of the tournament

A stubborn innings from Wahab Riaz certainly didn’t let South Africa from winning the game by a big margin as Pakistan lost the game by 34 runs. Pakistan were dismantled for a score of 309 in 48.1 overs but this episode still remains one of the favorites in every fan’s mind. Relive the moment here: 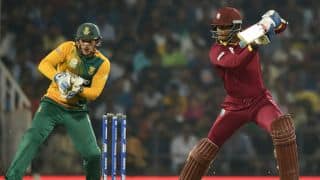