With 10 runs needed of the final over, Pakistan batsman Shoaib Malik struck a six and four off consecutive deliveries from pacer Aftab Alam to seal a thrilling win.

With 10 runs needed of the final over, Pakistan batsman Shoaib Malik struck a six and four off consecutive deliveries from pacer Aftab Alam to seal a thrilling three-wicket win for Pakistan in a Super Four clash of the Asia Cup 2018 against Afghanistan on Friday night.

Malik had refused a single off the first delivery but wiped off the arrears in the next two deliveries to break Afghanistan hearts. While the players were shaking hands after the match ended, Alam, the bowler, broke down.

As he was being consoled by his teammates, Malik, who scored an unbeaten 51, spotted what was happening and straightaway headed towards Alam offering him comforting words.

Shoaib Malik went ahead to sympathise with Aftab Alam, who broke down into tears after conceding consecutive boundaries – a sixer and a four, which cost his team a defeat. #Humanity#Sportsmanship#Pakistani sHeart pic.twitter.com/pd4NWmB9yi

Users on social media were quick to praise the Pakistan allrounder for his gesture and even Pakistan Cricket Board (PCB) took to Twitter, posting a picture of Alam being consoled by Mohammed Nabi and Malik.

Afghanistan posted 257/6 thanks to an unbeaten 97 from Hashmatullah Shahidi and captain Asghar Afghan’s 67 off 56. Pakistan though lost opener Fakhar Zaman for a duck but Imam-ul-Haq and Babar Azam led the recovery from the early blow. Both struck half-centuries as they added 154 runs for the second wicket. But Afghanistan managed to take the match into the final over with the spin duo of Rashid Khan (3/46) and Mujeeb Ur Rahman (2/33) inflicting the damage.

As it turned out, Malik held his nerves to seal the encounter in his team’s favour. Pakistan next face India while Afghanistan will lock horns with Bangladesh. 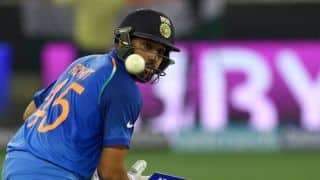 We will try to replicate our performance against Pakistan: Rohit Sharma