Left-arm pacer Sohail Tanvir is in hot water after his shocking send-off to Ben Cutting in a Caribbean Premier League match between St Kitts and Nevis Patriots and Guyana Amazon Warriors at Providence Stadium.

After being hit for a six, Guyana’sTanvir landed a yorker to clean up Cutting on 15 and then as the batsman was departing, he showed two middle fingers to the Patriots allrounder. That was his only wicket of the match as he finished with figures of 1/24 from his four overs.

#CPL2018 Sohail Tanvir bowls Ben Cutting after being hit for a six the previous delivery, then gives him the double finger!! Shocker! Has to be some sanction from that..kids watching. That said appears anything goes these days pic.twitter.com/vMLpUEdVdb

Considering the stance of match officials over player’s behaviour in recent times, Tanvir is in line for a strict punishment for his act which was termed as ‘pathetic’ by Trinbago Knight Riders Chris Lynn on Twitter.

Pathetic send off from Tanvir #CPLT20

Patriots posted 146/5 in their allotted 20 overs with opener Chris Gayle top-scoring for his team with 65-ball 86. Gayle hit seven fours and five sixes.

However, an attacking 79 from Guyana’s Shimron Hetmyer saw them chasing down the target in 16.3 overs with six wicket remaining. Hetmyer hit nine fours and four sixes during his knock. 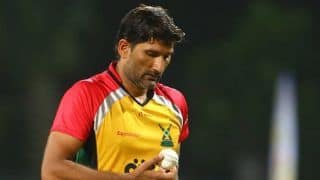