South Africa take a 2-1 lead in the ongoing India vs South Africa series as they defeat India by 18 runs in the 3rd ODI in Rajkot on October 18.

South Africa take a 2-1 lead in the ongoing India vs South Africa series as they defeat India by 18 runs in the 3rd ODI in Rajkot on October 18. Though the victory was a team effort, two performances that stood out were Quinton de Kock’s batting and Morkel’s bowling spell. Winning the toss, South Africa skipper AB de Villiers chose to bat first. De Kock opened the innings with David Miller. The partnership added a decent contribution before Miller left the crease. Playing Hashim Amla in the third position didn’t prove beneficial as he faced 15 balls scoring only 5 runs and gave in to Amit Mishra yet another time in the series. WATCH: Top moments from South Africa’s 18-run win vs India in 3rd ODI at Rajkot

A bigger and better knock came from Francois du Plessis’ way as he scored a good 60 off 63. De Kock completed his century but a misunderstanding caused by both him and deVilliers cost him his wicket. Proteas batting couldn’t revive henceforth as wickets kept tumbling and the innings saw a final score of 270 in their 50 overs. Farhaan Behardien was an exception amongst the tail-enders as he scored 33 runs from 36 balls including a final ball sixer from a Bhuvneshwar Kumar full toss.

Coming to bat in the second innings, India saw a quite similar picture as Shikhar Dhawan’s poor form continued. Rohit Sharma kept on hitting boundaries in each and every over to keep the scorecard moving as Dhawan fall for an outside off stump. Things seemed achievable as Virat Kohli and Rohit Sharma built up a good partnership. Rohit departed making a decent 65. Skipper MS Dhoni also started off well but he got out suddenly but Kohli went on to score 77 off 99. After these two wickets, Indian batsmen in the middle order couldn’t hold up much longer as both Ajinkya Rahane and Suresh Raina failed to leave any mark. India’s innings ended at 252-6. Morne Morkel was handed over the Man of The Match for his awesome spell of 4 for 39 in his 10 overs that proved to be a prominent game changer in the match. READ : Morne Morkel, Quinton de Kock help South Africa beat India by 18 runs in 3rd ODI at Rajkot

India vs South Africa: Moods and moments from the 3rd ODI at Rajkot 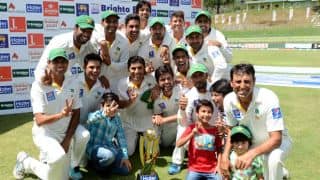