Raina, who has earlier lent his voice in Bollywood movie Meeruthiya Gangsters, is all set to launch his music video.

The last time Suresh Raina played for India was back in February, 2017 when England visited the country. Raina had scored 63 runs of India’s 202 as the hosts won the match by 75 runs but failed to pass the Yo Yo test, hence not qualifying for India selection. Though he worked a lot on his batting, as it seems from his updates, his Ranji Trophy performance in the 2017-18 season was one he would like to forget soon.

However, Raina’s latest has very little to do with cricket. The cricketer, who has earlier lent his voice in Bollywood movie Meeruthiya Gangsters, is all set to launch his music video. Raina recently disclosed the promotional video of the upcoming project.

Be the change you wish to see in the world Mahatma Gandhi Stay tuned! Only on @redfmindia @priyankacraina @nisha_narayanan #StayTuned #RedFmIndia #Change #BeTheChange

Apart from Raina, his wife Priyanka as well as baby girl Gracia also feature in the video. While posting the video, Raina attached a caption: Be the change you wish to see in the world – Mahatma Gandhi . His update also suggests that he has paired up with one of the popular radio stations of India for the project.

Raina has recently been retained by IPL franchise Chennai Super Kings, whom he played for before the team was banned for a couple of years. He had later joined Gujarat Lions as the captain of the side. 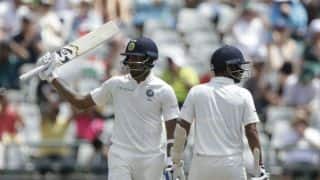