Video: The ‘Big Three’ and the damaging consequences on world cricket

Video: The ‘Big Three’ and the damaging consequences on world cricket

Last year, in an unprecedented move, India, England and Australia virtually took over the world cricket. The ‘Big Three’ brushed aside ICC’s future plans 2017 and 2021 Test championships, FTP’s and all the developmental programs and instead pushed their own revamp plans. Though the other full members resisted any such move initially, but eventually they all fell in line. This move created an outrage amongst the cricket fraternity with many former cricketers, administrators, journalists and the lovers of the game voicing their concerns. We bring to you some excerpts from this must watch video, which shows how the powerhouses are damaging the game in the name of promoting it.

Former Australian skipper and a legendary player Ian Chappell shares that all the big three cricket boards are concerned about is bottom-line. “I do understand that they do need a lot of money to run the game, but you do need to have a fine balance between the amount of money you bring and what is in the best interest of the game.”

Smaller nations will struggle with these new developments: Michael Holding

West Indies great Michael Holding believes that the control of world cricket going in the hands of India, England and Australia won’t do any good to the game. “I don’t see how three countries basically taking over the running of the game can make the game any better,” opines Holding. He further says that with the people having self-interests controlling the game, the interest of the game is under serious threat. He also suggests that other full members could’ve done more to oppose the move, but they all fell in line when it came to revenues. “It’s not that they didn’t protest, but they all joined the ‘Big three’ after they were offered future tours and huge TV revenues. Under this new arrangement, the smaller nations are the biggest losers.”

Former ICC Chairman Ehsan Mani says that instead of standing up to India’s overambitious move, England and Australia appeased the Indian board. According to him, all three boards must understand that only the three of them can’t play Cricket. It’s in the best interest of the game that it develops globally and the smaller nations get more and more number of games. Former PCB Chairman Zaka Ashraf reveals that he was offered to join the big three and make it ‘Big four’, but he simply refused to become a part of the ‘gang.’ He did try to oppose the mighty triumvirate by managing five votes against them, but the resistance didn’t last long.

On the other hand, the heads of the ‘Big three’, N Srinivasan now also the ICC chief and then BCCI head, Giles Clarke of the ECB and Wally Edwards of Cricket Australia, continue to ignore the concerns of the cricket fraternity and remain defiant on their perspective as ever. What bewilders is that how can someone who’s been reprimanded and deemed unfit to reign over the BCCI by the SC is considered good enough by the ICC to run it. Srinivasan appears stubborn as always, dismissing the talks of conflict of interest issue surrounding his Chennai Super Kings (CSK) stake. Edwards can be seen offering unwavering support to the ICC chief.

Towards the end, IPL founder turned fugitive. Lalit Modi can be seen spitting venom on the big three. He also hints at his plans to help create a rebel league by claiming he has the blueprint ready for it and that hefty pay-checks to top international players won’t be an issue. 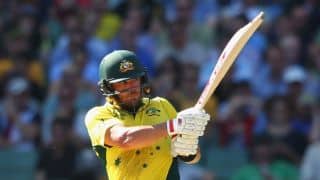