Video: The 'other side' of Andrew Symonds' personality; gives kids a lifetime opportunity

Video: The 'other side' of Andrew Symonds' personality; gives kids a lifetime opportunity

Watch the mesmerising video and take a look at Symonds’ great character on the field.

Former Australian cricketer Andrew Symonds is primarily known to be an intimidating cricketer who portrays a tainted image in terms of sportsmanship. There have been many instances in the past where Symonds has been involved in ugly spat and controversies.

The below video portrays the other side of Symonds which is kind, gentle and caring. In a domestic match between Australian Cricketer’s Association XI and Australian XI at Brisbane in November 2008, Symonds did something extra ordinary.

Playing a game with the greats is probably every cricket aspirant’s dream and Symonds certainly gave two guys a taste of it. While representing Australian XI, Symonds was fielding at long-off and was in a live chat with the commentators. He out of nowhere gave two young kids a golden opportunity to field in the game as he backed off and allowed them to field simultaneously. It was a great gesture by him as he fulfilled someone’s dream

Watch the mesmerising video and take a look at Symonds’ great character on the field. Symonds also scored 45 runs with the bat as his side lost the game by 64 runs. But this episode was cheered and applauded by fans all over the stadium and Symonds definitely won many a hearts with this. 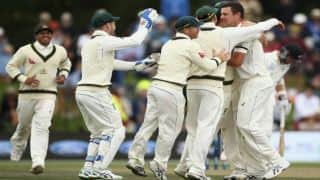