'Hasan Ali gate crashed the flag lowering ceremony at the Wagah Border to hype up the crowd with his trademark wicket celebration' read The Dawn's Facebook caption of the video.

During a drill performed by armed forces of India and Pakistan, Pakistani pacer Hasan Ali was seen showing his ‘on field antics’ at Attari-Wagah border. His gesture was shown towards the Border Security Force (BSF) and Indian audience. However, that entertained the Pakistani crowd. Ali was seen patting his thighs, raising his arms and celebrating just like he does when he takes a wicket of a batsman. A man with civilian dress is seen escorting him back. His act spanned for 40 seconds.

Hassan Ali with his wicket-taking celebration at Wagah border pic.twitter.com/yugtjQlAhI

Mera dost @RealHa55an entertaining everyone at the Wahga border. He really does know how to engage the crowd. pic.twitter.com/ts77QR6TXb

Other Pakistan cricketers also attended the ceremony. The video was released on The Dawn’s Facebook with caption ‘Hasan Ali gate crashed the flag lowering ceremony at the Wagah Border to hype up the crowd with his trademark wicket celebration.’

However, the gesture shown towards BSF and Indian audience has not gone well with them. They have considered the act as an interference by a Pakistan civilian during the ceremony. BSK Inspector Mukul Goel told The Sunday Express over phone, “The act has hit the sanctity of the parade. We will lodge a protest with Pakistan Rangers. Anyone can make any aggressive gesture in the viewers gallery on both sides but no public person can interfere in the parade. Before or after the parade, the people are free to do such things, but not in the middle of the parade.”

BSK spokesperson and DIG R S Kataria who was not present during the parade added: “I am on leave. I have inquired into it. A BSF officer at Attari has told me that the national cricket team of Pakistan had come to witness the ceremony at Wagah. One of the cricketers from their team started making provocative gestures during the drill. It happened on Pakistani side. Pakistani officers later made that player sit. Since it is a drill of forces of two countries, BSF is lodging protest with Pakistan Rangers.” 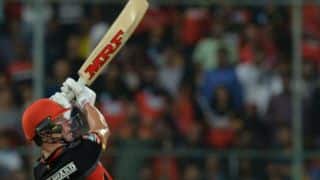