Steven Smith knew he would be treated with hostility after his admission of ball tampering on Day Three of the Cape Town Test against South Africa. Come Day Four, the Newlands crowd wasted no time to make them heard. Smith s dismissal in the second innings came much to the excitement for the home crowd. Smith s walk of shame saw the whole stadium boo him in unison. Dean Elgar off Morne Morkel’s bowling caught Steven Smith for 7 in Australia s sorrowful second innings were they were bundled out for 107, chasing 430 to win.

Australian captain Steve Smith being booed all the way off the field at Newlands after he was dismissed by Morne Morkel @IOLsport @IOL #SAvAUS pic.twitter.com/0oNnanKfoN

Smith’s entry too was marked by constant boos, and it remained throughout his short stay at the wicket.

South Africa went to win the third Test by 322 runs to gain a 2-1 lead in the 4-Test series. Smith was earlier banned by ICC for one match and fined 100 per cent off his match fees. He ahead of start of Day Four, resigned as skipper for the ongoing Test. 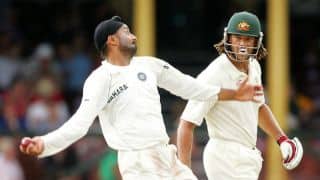