The video saw his teammates like Jaydev Unakdat, Ankit Rajpoot and others joining Holder in the chorus.

The West Indian Test and One-Day International (ODI) skipper Jason Holder is not only a good cricketer but also an excellent singer. He has managed to sing a song in Hindi without facing any difficulties. If one just hears him singing that without knowing who the singer actually is, there is no doubt in assuming it will be difficult to guess that the singer is a West Indian. Kolkata Knight Riders on social media tagged Holder saying, “Bollywood is in our blood. So can you be a filmy #Knight? We want you to sing a Bollywood song for your prize!.” In reply, Holder did it in style as he shared him singing the title track of the Bollywood film starring Shraddha Kapoor and Aditya Roy Kapoor, Aashiqui 2. FULL CRICKET SCORECARD: Kolkata Knight Riders vs Kings XI Punjab, IPL 2016 at Kolkata

The video saw his teammates like Jaydev Unakdat, Ankit Rajpoot and others joining Holder in the chorus. Kolkata Knight Riders (KKR) are at the top of the points table of ongoing Indian Premier League (IPL) with six wins from nine matches played so far in the tournament. KKR and Gujarat Lions have 12 points after nine matches and a better run-rate has kept KKR above the Lions. KKR’s previous match was against Kings XI Punjab. The close encounter end in KKR winning it by mere seven runs.

KKR skipper Gautam Gambhir has suggested that KKR are not going to take any game for granted in IPL 2016. The two-time champions have a great chance to lift the trophy for a third time with the way they have been performing so far. The likes of Andre Russell, Robin Uthappa, Yusuf Pathan, Gambhir and others have been doing their bit and this collective effort from all the players is helping them dominate in the ninth edition of IPL. 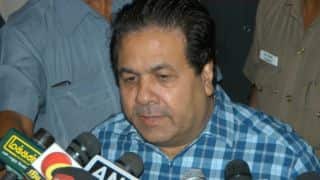