Video: When Corey Anderson re-wrote a record after more than 17 years

Video: When Corey Anderson re-wrote a record after more than 17 years

A record which remained unbroken for more than 17 years was rewritten by a 23-year old.

It was the third One-Day International (ODI) of West Indies in New Zealand 2013-14 ODI series. West Indies, winning the first ODI by 2 wickets, were ahead by 1-0 in the series as the second ODI had been abandoned due to rain. The third ODI got curtailed once again letting both the teams play only 21 overs each. New Zealand were eager to win this one in order to get back into the game and that was quite evident from their body language. Though Martin Guptill departed making just a single run, Jesse Ryder made his return to the side count. After Brendon McCullum departed scoring an 11-ball 33 and Ross Taylor s brief innings of 9 runs, Corey Anderson took the crease. He knew there weren t many overs left to score; he had to hurry, score fast and so he did. On this day, Anderson welcomed 2014 as he went berserk and scored the then fastest ODI hundred. With a strong support from Ryder at the other end, Anderson went on to play a knock that rewrote history. Starting off with a single, Anderson reached his half century in just 20 balls while he took another 16 balls to reach 100. His scorecard looked like 1 4 1 0 1 1 6 1 0 2 4 6 6 6 6 6 1 0 0 6 6 6 6 6 0 1 4 4 1 1 6 the moment he reached his century. Till the time New Zealand finished their batting, they were 283 for 4 from just 21 overs and Anderson remained unbeaten at 131 off 47 deliveries. A record which remained unbroken for more than 17 years was rewritten by a 23-year old. Williamson had overtaken Shahid Afridi, who had scored a 100 off 37 balls on his first innings in international cricket in 1996. Though a remarkable feat, the record was broken yet again the next year by South Africa batsman AB de Villiers who scored a 31-ball century on January 18, 2015. Co-incidentally, that innings was also played against West Indies. 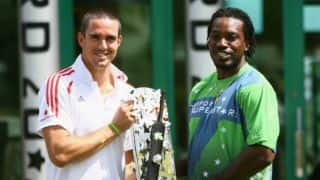