Basking in the glory of Chennai Super Kings' second successive IPL triumph, the team's batting hero in the finals, Murali Vijay, said he would now aim to carry his fine form into India's Test series against the West Indies next month. 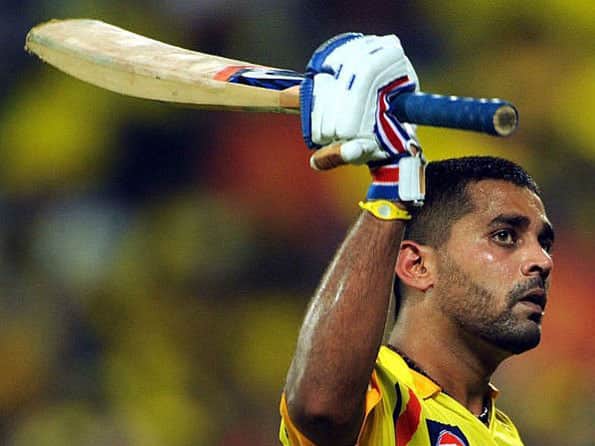 Basking in the glory of Chennai Super Kings’ second successive IPL triumph, the team’s batting hero in the finals, Murali Vijay, said he would now aim to carry his fine form into India’s Test series against the West Indies next month. Vijay’s 52-ball 95 was the cornerstone of Chennai Super Kings’ mammoth total of 205 in the IPL finals which the Royal Challengers Bangalore failed to chase and lost by 58 runs.

“I am enjoying this moment and looking to improve on all aspects of my cricket, batting and everything. I am looking forward to join the Indian team in the Tests in which I really want to carry the momentum and do well,” said the opener who has been picked for the three-match series in the Caribbean starting June 20.

For now, Vijay said he was savouring the CSK’s triumph. “I really feel happy. It has been an absolute team effort. I am really happy to be part of the Unit,” he said.

“I was confident about my tasks and did not worry much about anything. Everybody in our team was performing well. I raised hand and said to myself that this is going to be my day and I succeeded,” he added about his knock which comprised four fours and six sixes.

About last night’s match, Vijay said he just stuck to the basics and the rest fell in place.

“Actually, I was not trying to do anything differently. I was trying to see the ball and hit it. I know that if I bat well for the first six over, then I can take it from there. I was just working on the basics,” Vijay explained.

“It was a crucial match for us and I wanted to grab the chance to do well. I am happy for my teammates because they really supported me. Without their effort it would not have been easy for me. My thanks go to the CSK members,” he said.

Asked whether he was disappointed about missing out on a hundred, Vijay said the thought struck him only after he had finished celebrating the win. “A bit now. But at that time I was trying to hit the ball. I am happy that the team has won,” he said.

The 27-year-old said he was under pressure during the final. “It a knockout game. That itself is a pressure on everybody. If I say that I was not under pressure, it is not right. As a professional, I have got to cope with it. That is a real challenge to me. I think we have done well as a team to retain the IPL trophy,” he said.

Aravind happy with his performance in IPL4