Jammu and Kashmir were bundled out for 75 in first innings.

Alur (Karnataka): Medium-pacer Harshal Patel bagged a five-wicket haul as Haryana skittled out Jammu and Kashmir for a paltry 75 and cantered to a 10-wicket win in their Group B Vijay Hazare cricket match here today. Electing to bat at the Alur Cricket Stadium, Jammu and Kashmir batsmen looked all at sea against Harshal’s (5 for 21) controlled swing bowling and Amit Mishra’s (3 for 4) spin as the bowling duo shared eight wickets between them to wrap up the innings in 22 overs. Off-spinner Jayant Yadav also bagged two wickets as batsman Bandeep Singh top-scored with 24 runs while No.9 Zahoor Sofi remained unbeaten on 20. Live Cricket Score, Vijay Hazare Trophy 2015-16, Haryana vs Jammu & Kashmir, Group B match

The innings saw five ducks including skipper Mithun Manhas and wicketkeeper-batsman Ian Dev Singh, who fell to Harshal’s pace and swing. Coming out to bat, openers Nitin Saini (20 not out) and Harshal (54 not out) made short work of the chase to pocket the match in 11 overs.

In a bid to pick some wickets and reduce the victory margin, Manhas utilised six of bowlers but to no avail. This was J&K’s second successive defeat after losing to Jharkhand in their opening match, while Haryana returned to winning ways after going down to Karnataka post a triumph in their first game against Kerala. 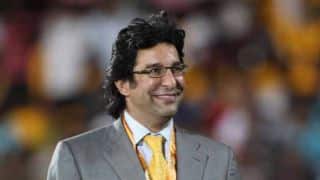