A round-up of the C division matches in round seven of the 2018-19 Vijay Hazare Trophy.

A round-up of the C division matches in round seven of the 2018-19 Vijay Hazare Trophy.

Ravi Chauhan recorded his maiden List-A century in just his second match as Services made short work of Gujarat s target of 220. Chauhan and Rahul Singh Gehlot (55* off 48) steered the side home by nine wickets to almost 12 overs remaining as Services continued their fine run in the Vijay Hazare Trophy. The win, their fourth in five matches, shot Services to the second spot, while Gujarat slipped to fifth with their first defeat in the tournament.

Gujarat were provided a promising start with Parthiv Patel and Kshitij Patel putting 65 for the opening wicket, but lack of partnerships caused a middle order collapse as barring Rujul Bhatt, no batsman was able to get going. Hemang Patel chipped in with 33 off 34 balls to take Gujarat above 200. Diwesh Pathania was the pick of the bowlers for Services with 3/36 in 10 overs. In reply, Chauhan and Nakul Verma started well putting 137 for the opening wicket which in turn, took the match away. Gahlaut and Chauhan knocked off the remaining runs without any fuss.

Bravish Shetty struck a maiden List A century, and along with a half-century from BB Ghosh and Rajib H Saha s 3/44 anchored Tripura s 48-run win over Rajasthan. Having lost Udayin Bose for a duck, Shetty and Ghosh struck a 153-run stand for the second wicket, after which the rest of the batsmen struggled to put up a substantial score with Rahul Chahar picking up 3/44.

In reply, Rajasthan s chase never really looked in control. They were reduced to 5/88 before Robin Bist and TN Dhillon put on 53 runs for the sixth wicket. CP Singh and A Lamba tried to resist with Bist but Tripura s bowlers maintained tight line and length and eventually bowled Rajasthan out for 194.

At the MA Chidambaram Stadium in Chennai, Bengal registered a five-wicket win over Assam but not before stuttering to lose five wickets. Pradipta Pramanik picked up 4/27 to restrict Assam to 150, before Vivek Singh s half-century and useful lower order contributions from Kanishk Seth and Shahbaz took Bengal home in 25 overs.

Barring Riyan Parag and Abhishek Thakuri, no top order Assam batsman managed to enter double digits. Abu Nechim resisted with 31 off 44 but Bengal kept chipping away with wickets. Bengal, in chase, were on the mark with a run-a-ball 51 before Mrinmoy Dutta and Mukhtar Hussain sent alarm bells into the Bengal camp. Seth and Shahbaz s unbeaten 40-run stand saw Bengal home to extend Assam s wait for their first win of the tournament. 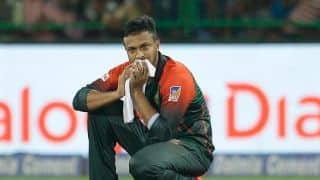