Amitoze Singh top-scored for Punjab with 91.

Punjab defeated Odisha by seven wickets in the Vijay Hazare Trophy semi-final at the Sardar Vallabhai stadium on Sunday. It was batsmen Amitoze Singh who led the way with a fantastic knock of 91 as Punjab chased down Odisha’s target of 239 in 48.3 overs.

Mandeep Singh too contributed handsomely with 81. His innings contained seven fours and one six. Together Mandeep and Amitoze put on 167 runs for the second wicket after Punjab had lost Manan Vohra for four.

The manner in which Amitoze Singh paced his innings was nothing short of terrific. He never looked of control as he went about accumulating the singles and hitting the boundary whenever there was a need for it.  In total he hit eight fours and one huge six.

After Behera ended the 167-run partnership between both the Singhs there seemed a ray of hope for the Odishans as Amitoze Singh was run out shortly after by Biplab Samantaray.

Thereafter old hand and India veteran Yuvraj Singh and Taruwar Kohli guided their side home without any further hiccups. It was Taruwar Kohli who was more aggressive between the two.

The Odisha bowlers were simply not penetrative enough, although, in their defence they needed much more than a score of 238. Furthermore they ran into two batsmen who played in determined manner as they made sure Punjab would not be in any sort of trouble. They were very severe on Preetamjeet Das who conceded 25 in his two overs.

Earlier Punjab had inserted Odisha after winning the toss. It was Arabind Singh 89 that propelled the Odishan team to 238.His innings contained nine fours and a solitary six.

The Punjab bowlers got off to a terrific start as they were quickly prised out opener Paresh Patel in the third over with Odisha’s score on 11. Thereafter Nataraj Behera and Anurah Sanghi put on 61 but they consumed a lot of time doing so and this hurt the Odisha team. 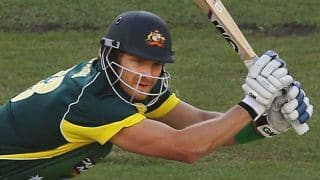