Vidarbha chased down the small target of 113 with 21.1 overs remaining.

Swapnil Bandiwar produced a brilliant pace bowling show with a five-wicket haul as Vidarbha crushed Uttar Pradesh by nine wickets to qualify for the pre-quarter finals from Central Zone in the Vizay Hazare Trophy here today.

Vidarbha captain Shalabh Shrivastava’s decision to insert Uttar Pradesh in after winning the toss proved a masterstroke as Bandiwar ripped through the Uttar Pradesh top order to shoot them out for just 112 in 37 overs.

Vidarbha chased down the small target of 113 with 21.1 overs remaining with Faiz Fazal hitting 56 not out in 94 balls. Jitesh Sharma contributed 43 as Vidarbha scored 113 for one in 28.5 overs.

The home side finished second in Central Zone behind Railways on second spot with 12 points from four matches, after three wins and a loss.

Bandiwar created havoc in Uttar Pradesh innings as he sent the top four batsmen of the visiting side packing to reduce them to 32 for four in the 11th over. Uttar Pradesh never recovered from there and they could crossed the 100-mark thanks to a resolute 59-ball 36 not out from Akshdeep Nath. 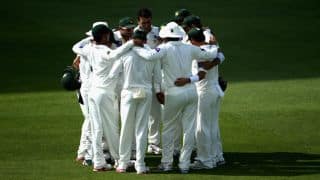 Pakistan earn $150,000 reward from PCB for win over Australia

Breaking News!!! Ravindra Jadeja to star in the next James Bond film!