Gautam Gambhir starred with the bat for Delhi in their win against J&K.

Virender Sehwag‘s decision to continue batting at No 3 didn’t make much of a difference to his poor form but defending champions Delhi did enough to beat Jammu and Kashmir (J&K) by 38 runs in the opening fixture of the north zone leg of the Vijay Hazare Trophy.

Delhi scored 256 for eight in 50 overs after being put into bat on a typical low and slow Feroze Shah Kotla wicket with skipper Gautam Gambhir scoring 58 and adding 99 runs for the opening stand with Unmukt Chand (42).

While Sehwag coming in at No 3 scored only 15, Puneet Bisht (39) and Sumit Narwal (22) threw their bats around as the last couple of overs produced around 40 runs.

In reply, J&K had a rollicking start with Adil Rishi (36) and Shubham Khajuria (46) adding 72 runs in 11 overs for the second wicket but inexperience caused their downfall as they were all out for 218 in 45.4 overs.

Once Parvez Rasool (30) was gone, J&K didn’t have much chance.

Opting to field on a slowish track, J&K led by their skipper Parveez Rasool (2 for 52) and left-arm spinner Waseem Raza (3 for 58) did well in the middle-overs when stroke-making was extremely difficult.

Skipper Gambhir however looked in good touch as he hit seven crisp boundaries in his 79-ball innings. Playing on a sub-standard track, not conducive for good strokeplay, the left-hander waited for the loose deliveries and completed his 50 with a late cut off Rasool.

The J&K skipper however removed both openers. While Unmukt was bowled trying to whip the offie across the line, Gambhir got a faster delivery and was rapped on the pads trying to play the cut shot with very little room for it.

Sehwag played an exquisite square cut but when tall left-arm slow bowler Raza fired one in the block hole, he tried to dig it out. The bowler timed his spot jump nicely to take a neat return catch.

“I had expected that we could restrict Delhi to 220 but last two overs cost us dearly. Even while batting, we were doing well during field restrictions,” Rasool said after the match.

In another match of the North Zone leg, Haryana beat Punjab by 7 runs in a 32-overs-a-side affair.

Batting first, Haryana scored 153 for eight and then restricted Punjab to 146 for eight. 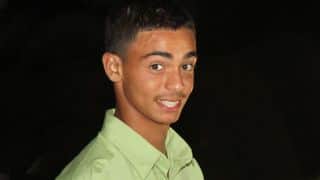 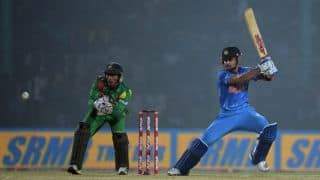